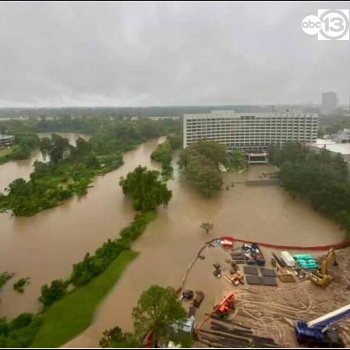 There Are Heroes Among Us

As Tropical Storm Beta approached the flood-prone Houston area on the weekend of September 18, 2020, the Houston RO family stepped up to serve the communities of Riverway Houston and Comp-U-Dopt in order to proactively protect the facilities from flooding. The storm was predicted to bring high winds and heavy rain, providing the team with an opportunity to serve RO's clients, and the Houston community.

The teams worked to prepare the facilities and surrounding areas to successfully prevent storm water from entering the buildings.

At the Comp-U-Dopt project, the team worked over the weekend to close up areas of the building to prevent the storm water from entering the building. This was a difficult task, but the RO team prevailed and the facility received no damage or flooding.

The One and Three Riverway project pictured would have been flooded by the nearby Buffalo Bayou for a second time in three years had the RO team not worked proactively to protect the building. The team began to put a plan into motion on Friday in anticipation of the storm, by securing materials in the laydown area, as well as by setting up pumps. As the rains came, the laydown yard became inaccessible and mostly underwater. In fact, the black swans from the nearby Omni Hotel even ventured into the area, as the Buffalo Bayou expanded its flow. Had the team's plan not worked, the buildings would have undoubtedly taken in water again, rendering them unusable for a second time.

Hard hats off to these men and women, including Scott Kittrell, Jennifer Gonzales, Justin Doughty, Wes Elliott, Luke Roach, Nick Mazzocchi, Michael Davis, and Cesar Zuniga, for their hard work and dedication! We truly have The Best People, and RO is proud to be Houston strong.